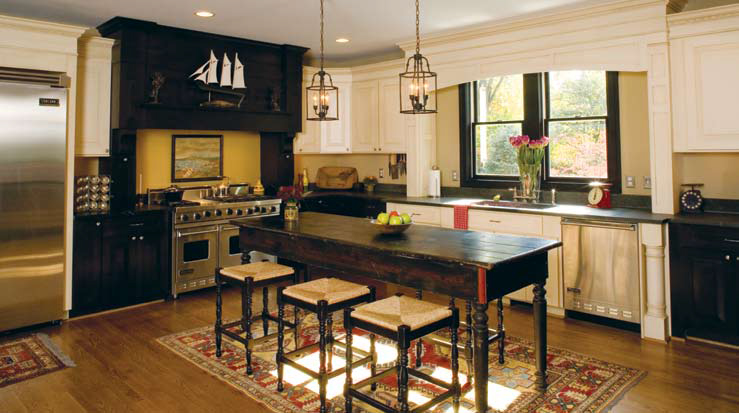 Posted at 19:34h in PUBLICATIONS by invtech

Doug DeLuca enjoys pushing the limits on the indoor and outdoor kitchens he builds.

Doug DeLuca enjoys pushing the limits on the indoor and outdoor kitchens he builds. “Anything created for an indoor kitchen can be replicated outside,” says DeLuca, founder of Federal Stone and Brick, LLC, an environmental design-build firm based in Falls Church, Virginia. Viking products play a major role in DeLuca’s kitchen designs. “I use Viking in all my projects, whether inside or out,” he says. “I don’t think twice about using Viking appliances because they’re superior products with a wonderful warranty,” he explains.

One of DeLuca’s impressive recent projects involved the renovation of an entire house in Sleepy Hollow, Virginia. The project converted a 2,600 square foot Ranch style house into a four-story 11,000 square foot New England farmhouse. The focal point of the indoor kitchen is an antique harvest table that was neglected and dust-covered when DeLuca discovered it in a New England barn. The restored table, combined with a full array of Viking products — including a 48″W. Viking range, wine cellar, dishwasher, 36″W. all refrigerator, 36″W. all freezer, double ovens, and a microwave oven — creates a kitchen design highlighting a spectacular meeting of old and new. The outdoor kitchen features a 41″W. Ultra-Premium Grill and C4 Cooker (Charcoal Ceramic Cooking Capsule) installed in custom-designed and crafted stone foundations that are both beautiful and functional. “Vertical stone is the hardest thing in the world for a builder to do well,” says DeLuca. The grandson of a stonemason who emigrated to the United States from Italy, as well as a third-generation builder, DeLuca often designs and builds spectacular stone fireplaces for his clients’ outdoor kitchens. “All of Federal Stone and Brick’s creations are custom-built in a controlled environment, says DeLuca. “I pride myself on designing and building outdoor kitchens that are built with quality and integrity. That’s where the Viking product meets Federal’s stone work. The combination is so critical.” DeLuca is currently working on developing a patented technology for portable outdoor stone that will allow pieces to be palletized, put on a truck, and shipped anywhere in the United States. “Basically, we’re creating heirloom outdoor kitchens if these pieces can be put on a truck and moved,” he says. “Creating the portable stone outdoor kitchen is like creating a piece of art.” From an early age, DeLuca worked on his parents’ building projects. However, before he opened his own business, DeLuca spent some time living in New York City and working at The Rhinelander Mansion, designer Ralph Lauren’s flagship store on Madison Avenue. “The Ralph Lauren brand is a lifestyle, not just a product,” says DeLuca. “The greatest thing that I learned early in design was creating purpose and a lifestyle. I think as designers we must start creating lifestyles and not just single one-time designs.”

“Viking, too, is not just a product,“ says DeLuca. “It has become synonymous with the epicurean lifestyle.” “Homes have become destinations and people are putting in amenities that make their homes a destination,” he explains. “When I design indoor and outdoor kitchens, I’m creating spaces where people can interact and entertain, spaces that make their lives more meaningful.” “Some people try to save on appliances by buying them at big box stores,” says DeLuca. So whenever he is working with a client, he invites them into his own home “to see, use and touch” his Viking products, which include a convection oven, dishwasher, wine cellar, microwave oven and refrigerator. “I think introducing clients to Viking products is an education process,” he says. “Once people see how the appliances are built and learn where they’re built — right here in the United States — they understand why I use only Viking appliances in the kitchens I design and why I endorse the products to the ‘nth’ degree.” In his spare time, DeLuca is working on “50 Picnics,” a project that is near and dear to his heart. “The project is all about understanding and promoting America in all its glory,” he explains. “As a designer, it’s easy to become pigeon-holed in our world. This project, which involves collecting recipes in all 50 states, allows me to get out and see the country, as well a promote America,” he adds. “It’s a passion of mine that doesn’t feel like work.” Ultimately, DeLuca plans to publish a coffee table book full of photographs about his travels in order to share how America enjoys a picnic in the great outdoors. One city DeLuca definitely plans to visit during his journeys is Greenwood, Mississippi, the home of Viking Range Corporation. The growth of Viking has led to the revitalization of the city’s downtown, with the Viking offices spread between 12 buildings, all of which are listed on the National Register of Historic Places.